https://www.broadwayworld.com/off-broadway/article/Pan-Asian-Repertory-Theatre-Announces-Cast-And-Creative-Team-For-Return-Engagement-Of-NO-NO-BOY-20171211
Posted by Innocent When You Dream at 4:07 PM 3 comments:

(New York, NY) – Tisa Chang, Artistic Producing Director of PAN ASIAN REPERTORY THEATRE, announces for its 41st season with a special limited run - in tandem with DAY OF REMEMBRANCE - of NO-NO BOY by
Ken Narasaki, directed by Ron Nakahara, and based on the groundbreaking novel by John Okada
NO-NO BOY will run from February 7-18, 2018 at The Studio Theatre at Theatre Row (410 W. 42nd Street).

John Stoltenberg of DC Metro Theatre Arts says “NO-NO BOY is… extraordinary and essential theater. It's a play about what happened to innocent people when this country demonized and incarcerated Japanese Americans during World War II. To witness it now—as anti-Muslim rumblings are being trumped up to a roar—is to be shell-shocked by how close we are to seeing that horrific and fear-fueled history repeat. …I urge
everyone who cares about how theater connects to this country's past and future to catch it if you can.”

Ken Narasaki says, “Even today, the term [“No-No Boy”] can spark bitter explosions amongst people who remain angry about the kinds of real life-or-death decisions they and their generation were foced to make…”
Tisa Chang says, “we are proud to continue the stage life of NO-NO BOY of a period of historical amnesia but where questions of allegiance and what it means to be an American are asked again.”
The sterling cast features Leanne Cabrera, Chris Doi, Scott Watanabe, Glenn Kubota, Karen Tsen Lee,
Claro de los Reyes, Shigeko Sara Suga, Hansel Tan, and Tony Vo. Stage Managers: Elis C. Arroyo and Sabrina Morabito.

Playwright KEN NARASAKI’s plays include the recent adaptation of NO-NO BOY, award-winning plays INNOCENT WHEN YOU DREAM (winner 2006 Kuma Kahua Pacific Rim Award), and THE MIKADO PROJECT (co-written with Doris Baizley – winner, 2008 Kuma Kahua Pacific Rim Award), and GHOSTS AND BAGGAGE. As an actor, he starred in ZWEI PROFIS for German television, and appeared in Lane Nishikawa’s ONLY THE BRAVE; he’s also appeared in nearly 60 plays, including PO BOY TANGO, A WINTER PEOPLE, and THEORY OF EVERYTHING, in Chicago, Los Angeles, Singapore, New York, Seattle, San Francisco, Sacramento, and elsewhere.
Posted by Innocent When You Dream at 9:26 AM 3 comments:

No-No Boy is an extraordinary and essential play. It’s about what happened  to innocent people when this country demonized and incarcerated Japanese Americans during World War II. To witness it now—as anti-Muslim rumblings are being trumped up to a roar—is to be shell-shocked by how close we are to seeing that horrific and fear-fueled history repeat.
No-No Boy has been adapted into a tight, intense script by playwright and actor Ken Narasaki from the 1957 novel of the same name by John Okada. The pioneering New York City–based Pan Asian Repertory Theatre brought its simply staged production of the play to DC for two performances only, in the Burke Theatre, an auditorium with amphitheater seating inside the  Naval Heritage Center. The lobby display ambiance underscored graphically the military context of the play’s events. Directed with precision by Ron Nakahara and performed by a sterling cast of ten, No-No Boy blew me away from the very beginning.
The play is set in Seattle in 1946 as Japanese Americans are returning to their homes from the internment camps (“fenced…in the desert like they do the Jews in Germany,” as we hear a voice say). It follows the story of a young man named Ichiro (played with compelling focus by Chris Doi), who has just returned from two years in prison for refusing the draft. In a cinematic flow of episodes from Ichiro’s encounters with his family, friends, and others, No-No Boy  tells interwoven stories of how the war changed the lives of some dozen Japanese American characters in disparate and interconnected ways.
Projected onto an upstage screen is a huge Selective Service System seal, along with the text of two questions that we hear an official voice intone, demanding young men to answer in the affirmative:

When that loyalty oath was administered to Ichiro in the internment camp where he and his family had been sent, he answered both questions in the negative—hence the slur “no-no boy.” Now that the internment is over, other young men are saying yes and yes—and signing on to fight against the country where their forebears live.
During the course of No-No Boy some of the recruits return, some don’t. Some of their family members cope, some are shattered. Some in their circles assimilate as patriotic Americans, some remain torn. But the implicit personal and cultural conflicts wrought by this momentous military engagement will implode inside the lives everyone we are about to meet.
No-No Boy dramatizes a complex of perspectives, some of them contradictory, among Japanese Americans at the time; admirably, it does not mythologize a monolithic ethnic viewpoint. For instance Ichiro’s family is  divided over the conflict. His Ma  (Karen Tsen Lee)  is certain that Japan has won the war—and all else to the contrary is propaganda. His Pa (Glenn Kubota) loves her very much though he knows she is delusional, and he chastises Ichiro for confronting her and calling her crazy. What happens when Ma finally realizes the reality of what has happened to her homeland is heartbreaking.
In another stirring scene, Ichiro visits the home of Mr. and Mrs. Kumasaka (Scott Kitajima and Shigeko Sara Suga). They had a son named Bobby, and as his battle buddy Jun (Claro de los Reyes) relates the story of how Bobby was shot (“Ping, and he’s dead”), we hear the inconsolable keening of Mrs. Kumasaka.
Ichiro meets a friend he hasn’t seen in years named Eto (another remarkable performance by de los Reyes). Upon learning that Ichiro is a No-No boy, Eto spits at him with contempt. Another friend of Ichiro’s who served in the U.S. military—Freddie (an impressive Hansel Tan)—is far more supportive, to the extent that he fixes Itchiro up with Emi (a wonderful Leanne Cabrera). Her husband has been away for four years, re-upping in the army in Germany apparently with no intention to come back to her. With Freddie’s encouragement as well as Emi’s, Itchiro begins a relationship with her. They have a sweet scene in which they mime playing the piano together (“Do you know ‘Chopsticks’?” she asks in an instance of the script’s wit). It is as if in their mutually healing romance, Itchiro finds the acceptance and place in the world he has been bereft of since the war.
Other notable performances are given by Don Castro as Kenji, a friend of Itchiro’s who lost a leg in combat, and Tony Vo as Taro, Itchiro’s younger brother, who intends to enlist. When Itchiro asks him to think it over, Taro replies angrily, in a speech that conveys something of the passions coursing through this play:

I had plenty of time to think about it when you were in prison and here’s what I think: We were BORN here, we play BALL here, we listen to music here, we’re gonna get married here, we’re gonna have kids here. We OWE this country something for that! Let Ma believe whatever she believes, let Pa go along with it if that’s what he wants, but me? I’m an AMERICAN and I’m going to fight like an American! You and your pals? You had your chance and what did you prove? That they were RIGHT NOT TO TRUST YOU!

Sheryl Liu’s minimalist set makes effective use of a small table (which became that piano) and wooden folding chairs (which become a hospital bed, an automobile, a living room). The sound design by Ian Wehrle amplified those simple set pieces with such a vivid sense of place no more seemed needed. A lighting design was not utilized at the Burke, just a plain wash on the stage, which worked fine in the circumstances. And knife-fight choreography by Michael C. Chin was electricly authentic.
I spoke after the show with Nakahara and Artistic Producing Director Tisa Chang, who confirmed my supposition that the choice to produce this play now and perform it in DC had intentionally to do with the fear mongering abroad in our land. No-No Boy deserves to have real run here; it is every bit as worthy a stage work as any number of recent plays with a political conscience. Till that day comes, I can only urge everyone who cares about how theater connects to this country’s past and future to catch Pan Asian Rep’s No-No Boy wherever whenever you can.
Running Time: 90 minutes, with no intermission.
No-No Boy played June 18 and 19, 2016 at Pan Asian Repertory Theatre performing at The Burke Theatre in the Naval Heritage Center – 701 Pennsylvania Avenue, in Washington, DC.
RATING:

Posted by Innocent When You Dream at 2:31 PM 2 comments:

Pan Asian Rep to Produce No-No Boy in May

Great news!  Great news!  PanAsian Rep﻿ will doing a short run of NO-NO BOY in New York City this May 14 to May 18th at the Studio Theatre at Theatre Row - 410 W. 42nd St, NYC.  Directed by Ron Nakahara.  Click on the link below for more details!  If you're anywhere on the East Coast or can make it to New York City that week in May, be sure to go check it out, it's going to be a terrific production.

Here's a link to a video from our LA production, just for old time's sake:

Hope you can make it - and please, spread the word!  Happy Year of the Horse!
Posted by Innocent When You Dream at 8:29 AM 3 comments: 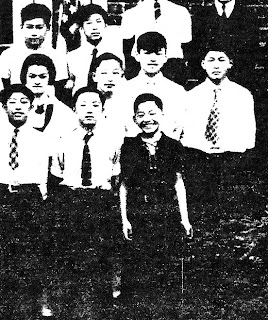 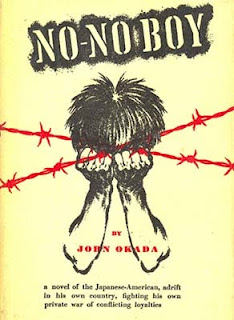 Posted by Innocent When You Dream at 8:16 AM 2 comments:

Pan Asian Repertory is going to do two readings of NO-NO BOY on November 16th and 17th, 2012 at the West End Theater in New York City as part of their Plays in Process Series.

Will keep you informed with more information as it becomes available!
Posted by Innocent When You Dream at 1:44 PM 2 comments: