Excerpt from Famous Suicides of the Japanese Empire

Author David Mura contacted me over the break and gave me permission to post an excerpt to his moving and thoughtful book about a Sansei academic trying to solve the mystery of his father and his missing brother.  So much of his book spoke directly to me and expresses part of the reason why I wanted to adapt NO NO BOY, and why I think the book/play is important to anyone trying to understand how we got to where we are.

This following passage is from the first few paragraphs of a chapter called ST. JUDE'S (page 118 of the paperback edition):

"I am the son of internees.  Two young people whom the government jailed because it believed that they might be spies for old Nippon.  Not quite Julius and Ethel Rosenberg, nothing as specific as that.  No, everyone in my parents' entire community was rounded up.  It was easier that way.  And most went along with the government, followed their orders to the letter, wanting to prove it was all a big mistake.  And some, at a certain point, did not go along.  Among these was my father.

"After all these years, this history seems no more real to me than nineteenth-century Polish politics or a list of the maharajahs of some Indian province.  A handful of obscure documents, a sidelight to the major, real events of history.  No one knows about it anymore; no one cares.  And what it all has to do with my father sinking afternoons into the dark folds of our living room couch, I still can't fathom.

"Perhaps, as the psychologists tend to view things these days, it was all chemical.  A few tabs of Zoloft or Prozac would have saved him; it would have all melted away.  And there'd be no past, no shame, no stigma from raising his hand in protest rather than bowing his head in patriotic obedience.  Perhaps politics had nothing to do with it all.  Perhaps it lay buried deep inside my father long before Pearl Harbor, before the war, before everything changed.  Merely biochemical fault lines, bad synapses, something in his genes.  Our genes."

(from FAMOUS SUICIDES OF THE JAPANESE EMPIRE by David Mura).
Posted by Innocent When You Dream at 11:05 AM 1 comment:

I just finished David Mura's FAMOUS SUICIDES OF THE JAPANESE EMPIRE.  I have to read for a living, so it's rare these days that I read for pleasure...usually, on a sort of busman's holiday, I read while on vacation.  I picked up his book because it has a great cover, a Roger Shimomura painting that's as haunting and evocative as Mura's book, and the plot description on the back mentions that the protagonist's father was a No No Boy.  It's full, it's complicated, and I love his voice, but the main reason I mention it here (besides recommending that you read it) is that it's got some passages that capture how I feel about our shared history.  There's one in particular that I wanted to quote, but I tracked him down and asked his permission, so I suppose the decent thing to do is wait, even though I can't imagine he'd object to it.

I'm going to quote a much shorter passage here, and if he objects and says, "Who the hell are you and no, you can't quote me on your damn blog", I'll just take it down.  If, instead he says, "Sure, what the hell", well, you can get an idea of why I want to quote a much longer passage that speaks to why it is I think it is important for us all to keep looking for our various and shared past:

"Perhaps if I could have kept imbibing that special nisei elixir of forgetting, I wouldn't have felt so lost all these years; I wouldn't have needed to ride into my own Western sunset like this.  (...) So here I am, still trying to remember, to track down all that's eluded me.  Or that I have eluded." -- David Mura, FAMOUS SUICIDES OF THE JAPANESE EMPIRE
Posted by Innocent When You Dream at 5:43 PM 1 comment: 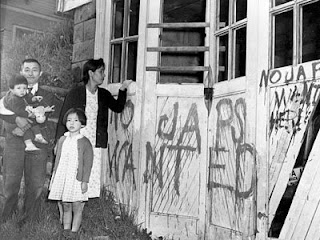 In the play, Kenji tries to explain to Ichiro how bad things were when they first came back to the Coast...this picture says it all.
Posted by Innocent When You Dream at 9:51 AM No comments: 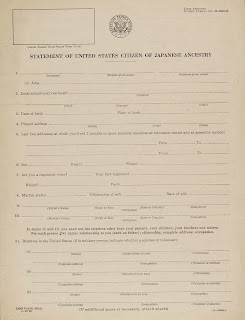 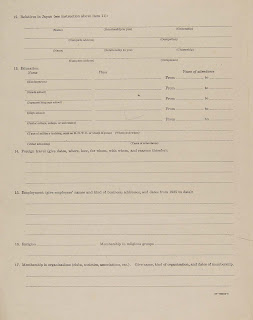 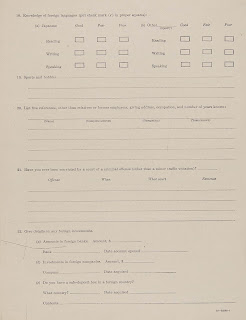 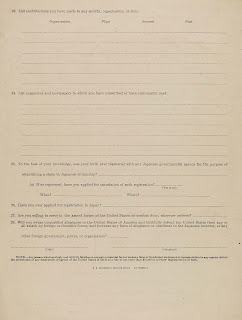 Posted by Innocent When You Dream at 9:19 AM No comments:

Steep Discounts Available for Groups of Ten or More
Timescape Arts Group presents the world premiere of Ken Narasaki’s stage adaptation of John Okada’s groundbreaking novel No-No Boy from March 26th through April 18, 2010 at the Miles Memorial Playhouse in Santa Monica, and we hope that you'll consider bringing a group to this important new play. We believe this is an excellent way to gather as a community to share our common stories, experiences, and perhaps even provide an opportunity for understanding.
Set after World War II as Japanese Americans return to the West Coast, the play follows draft resister Ichiro Yamada after he is released from prison and struggles to come to terms with the consequences of his choices, while the rest of the community tries to get back on its feet after a war that has uprooted them all. The cast includes (in alphabetical order) Keiko Agena, Emily Kuroda, West Liang, John Miyasaki, Sharon Omi, Sab Shimono and Robert Wu (more information about the production, the cast, the design team, and the process can be found at: nonoboy2010.com)
Produced by the same artistic team produced Innocent When You Dream (Critic’s Choice LA Times, Pick of the Week LA Weekly), which had a successful run at Electric Lodge in Venice and was later invited to perform at the Smithsonian Institute (Washington, DC) in 2008 (www.timescapearts.com), we believe this play will be as moving and thought-provoking as that production, if not even more so.
We will be happy to discuss the arrangement of post show discussions with actors and playwright after the show. Tickets for general admission are $25.00, but steep discounts are available for groups of 10 or more: $15.00 per person. Performances are Fridays at 8:00 pm, Saturdays at 3:00 pm and 8:00 pm and Sundays at 3:00 pm.
Please give me a call if you need additional information or would like to book a group. We look forward to seeing you at the show!
Sincerely,
Sharon Omi
Posted by Innocent When You Dream at 10:51 AM No comments:

More Context for No No Boy 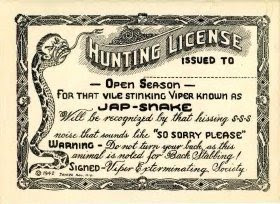 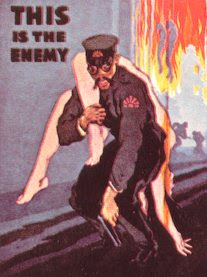 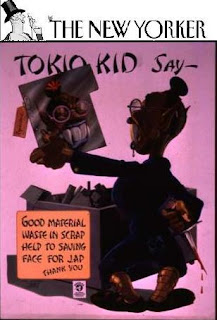 Posted by Innocent When You Dream at 2:08 PM No comments: